This year, while the 4th graders and up are participating in the 40-Book Reading Challenge, some of the 1st-3rd graders are trying the A-Z Reading Challenge. The challenge is to read at least one book starting with each letter of the alphabet (either by title or author). Here are Sophie (3rd grade) and Lucy (2nd grade), as well as Jamie (Pre-School), recommending books to each other, and having some fun. 🙂

Doesn’t this make you want to read? Especially The Chronicles of Narnia?! “I can’t read yet, but this is a good book!” 🙂

Today’s Favorite Friday post is a Youth Book Review written by Abby, who is a 6th grader from our Gracepoint Minneapolis church. She writes newspaper articles under the pen name Mr. Sketch (you’ll have to ask her why).

Wonder, by R.J Palacio. This book truly lives up to its name. Wonder is a book that you can never put down. I recently just read it again and it reminded me how well it was written and how it’s so true to real life.

The book is unique in the way that it switches from different people’s points of view. In this book a boy named August (Auggie) Pullman was born with a facial deformity (known as Treacher Collins Syndrome). Auggie’s condition is like a 1 in 50,000 chance of being born with it. When he finally goes to school with other kids for 5th grade, he faces big problems. Bullies are a HUGE one. Yet, he’s kind to everyone (even bullies who threaten to hurt him) and really tries to shrug off the taunts and teases. He goes through so much and he reminds us to persevere and never give up.

There are many supporting characters in the book. Jack Will is Auggie’s new best friend. He is challenged by going from being in the popular and “cool crowd” to hanging out with Auggie, which is lower than uncool. He’s brave and I admire that about him. He chooses to be with Auggie and even punches a bully because he was teasing Auggie. Summer Dawson is a girl who sat at a table with Auggie on the first day of school and has been every day since. She would fit perfectly into the” cool crowd” and they even ask her to join them. She says no because Auggie needs a friend. She takes a stand for what’s right. Julian Albans, popular kid, in the “cool crowd” bullies August Pullman. Julian is Auggie’s biggest bully. He calls him names and make the whole grade turn against Auggie. But when it starts to get old and nobody likes him anymore, things change.

Auggie’s English teacher, Mr. Browne, has a precept for his class every month. A precept is like a motto. One of his precepts that constantly appear in the book is: “When you have the choice to be right or kind, choose kind.” And to all those kids and people who were kind to Auggie, they truly took that precept seriously.

Wonder is an awesome book. It is currently my favorite book. After reading it the first time, I started writing out the book by hand. I loved it that much! I recommend Wonder to ages 10 and up, so like 5th grade and up.  5th grade is a really good time to read it because you can kind of relate to the characters in the book! I think the lesson I learned was that a person’s face does not mean that they’re different from everybody else inwardly. You will never look at a person with disabilities the same way again. I encourage everyone to read the book.

Emily here: As a teacher, I can echo Mr. Sketch’s sentiments and attest to the power of Wonder. I loved it personally, but this is exactly the kind of book I’d love. But in the last few years, I have seen every kind of kid and adult, even the “I hate reading” kind, love this book. It’s been a “gateway book” for many. I agree that it is right for about 5th grade and up. And by “up” I do mean all the way up! It is definitely a book for young and old alike. This book speaks to the power of a human story. Kids are drawn to this story without knowing what empathy means, but so many take the “Choose Kind” pledge that has swept across schools and libraries. And it has opened up discussions in classrooms about kindness, and even impacted the way kids treat one another. If you have a 5th or 6th grader, it’s likely your child’s language arts teacher will do a unit based on the book. This is a wonderful novel for conversations about what it means to be a friend, what courage is, what it means to “be yourself,” what taking a stand is, and there are so many precepts sprinkled throughout the book that you can write about or discuss.

This book has become a “franchise” of sorts, with 365 Days of Wonder: Mr. Browne’s Book of Precepts; the Wonder Journal, filled with inspiring quotes to think about and respond to; and Auggie & Me: Three Wonder Stories, a combined book of 3 shorter stories previously only available in e-book format. They tell stories from the perspectives of Julian (the bully), Christopher (Auggie’s oldest friend), and Charlotte (a new friend from school).

Have you read Wonder? If so, what are your thoughts? Do you agree that it is as wonderful as Abby and I think? If not, has this review prompted you to give the book a try? 🙂

[The Scene: Pastor Ed Kang‘s office hours at Golden Bear Cafe. The year: let’s just say it’s around the turn of the century. I know you’re surprised I was in college at the time, but you have to remember I started college when I was 8*. ]

Mind you, this was a gazillion years ago, so I’ve used creative license liberally in the following screenplay. But I do remember this encounter, and how I wanted to show Pastor Ed I was interested in conversing about things like books and literature — so above the fray of the typical college student. Ha!

HEK:  Pastor Ed, I love to read. What Christian books do you recommend I read? (hopeful this opens up the way to talk shop about books we have in common.)

EHK: Have you read C.S. Lewis?

HEK: (smiling, because The Chronicles of Narnia was a childhood favorite). Yes, I just love Lewis’ ability to explore spiritual truths through what seems to be an innocent children’s story. I do love me some Narnia.

EHK: (smiling graciously) Ah yes, Narnia is splendiferous, to be sure. Now, have you read Mere Christianity?

HEK: (puzzled because it seems kind of strange to call Christianity mere…) …um…

EHK: (fatherly chuckle, if Yoda chuckled) Much to learn, you still have, young padawan.

EHK: (leaning forward, voice hushed as though preparing to reveal the secret to life) Here are the five must reads by C.S. Lewis. After you read them, then we can talk about other Christian books.

EHK: Mere Christianity, The Problem of Pain, Miracles, The Screwtape Letters, and The Abolition of Man. In that order.

So there you have it. Did you miss it? Pastor Ed’s short list is what I’ve since then thought of as “The C.S. Lewis Five”. I’ve passed that list on to many a padawan at Gracepoint Berkeley church myself. 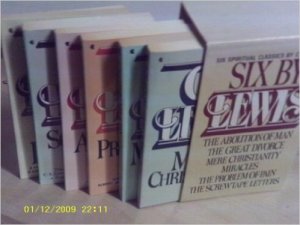 photo of this ancient relic courtesy of an amazon.com customer

I was too excited I had this list to be embarrassed. Only in retrospect do I shake my head. Proof that once a teacher’s pet always a teacher’s pet! And how happy was I (mixed with embarrassed) when I went home to my parents’ house and saw this exact set of books sitting right alongside my Narnia set. (It was actually Six by Lewis, because The Great Divorce was thrown in as a bonus, I guess.)

How about you? Have you read “The C.S. Lewis Five”? Which one is your favorite?