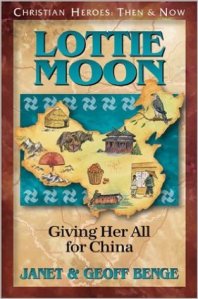 Lottie Moon: Giving Her All for China – Ten-year old Lottie Moon had seen too much bitterness and gossip among churchgoers to want anything to do with religion or God. In fact, if there was a single way to waste a life, Lottie told herself, being a missionary was it.

In a twist that only God could orchestrate, this spirited young girl who grew up to become the most educated woman in the American South would ultimately find her calling as a missionary to China. As Lottie watched her fellow missionaries fall to disease, exhaustion, mental breakdowns, and death, she became just as dedicated to educating Christians about the often preventable tragedies of missionary life as she was to educating Chinese people about the Christian life.

The sacrificial service of the unforgettable Lottie Moon has inspired and enabled countless others to give their all for the dream of seeing the whole world reached with the gospel.