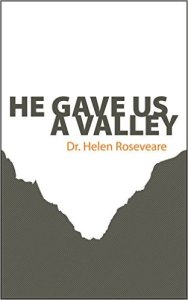 He Gave Us a Valley – After twelve years of missionary work in the northeast province of what was the Belgian Congo, building up a simple medical service, civil war erupted with horrific effects. During the war Helen was brutally beaten and raped and left with no choice but to return to Britain (this story is told in ‘Give me this Mountain’).

She quickly returned to the Congo in 1966 to assist in the rebuilding of the nation. She helped establish a new medical school and hospital (for the other hospitals that she built were destroyed) and served there until 1973. In the eight years following the war, despite endless frustrations, again and again God showed his unfailing guidance and unstinted provision for her needs. This book is the story of the joys and adventures of re-establishing the medical work, the church building programme and the work of forgiveness, necessary after the destruction of the civil war.