It’s been a long while since we had a reading testimonial. Today’s is from Philip, a college freshman from Klesis at Gracepoint Berkeley church, and our first male guest contributer! He and I go way back, and in honor of Narnia November (have you been reading/listening?), I asked him if he remembered our Narnia Challenge from almost ten years ago. I asked him if he would be willing to write a little something for the blog. 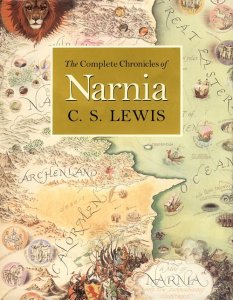 I can remember the first time that I heard The Chronicles of Narnia. It was in the first grade when my “Uncle Mo” (Maurice from Gracepoint Austin church) had chosen the first book to read as a bedtime story. It was The Magician’s Nephew, and while I can’t remember many of the details from that time, I do remember the excitement of hearing about magic rings and crazy adventures. Though I loved reading adventure novels growing up, it wasn’t until much later however, that I read through The Chronicles of Narnia for the first time on my own.

It was during my middle school years, either 6th or 7th grade, when Emily challenged me to see who would be able to read through the entire series first. It was a simple wager with a Barnes and Nobles gift card set as the crown for the winner. I remember reading the books as fast as possible, but at the same time trying to keep a hold of the plot development in order to prove that I truly had read through the entire series! Despite quick reading, and consequently some skimming, the land of Narnia that C.S. Lewis created was mesmerizing. Eventually I won the contest, probably due to my superior intellect (but in reality just due to the fact that I had more free time), and I don’t remember what I spent that gift card on, but I know that I gained so much more from that contest.

It was actually just last year that I decided to reread the entire series with a more developed understanding of literature, and a greater level of appreciation for such thought-provoking literature. The stories had not lost their magic as I felt that I myself had simply returned the land of Narnia that I had discovered as a younger child. It is true, however, that I had my mind blown by all the meaning and the powerful messages that I had missed. Understanding the themes of redemption and loyalty, the struggle between selfish action and sacrifice, and the symbolism that I simply failed to understand before had made the books even more amazing to me. C.S. Lewis had so vividly brought to life the idea that there is a distant land to which I belong as heir to the throne because the true king, Aslan, had made it so. Aslan being the embodiment of justice and right, a powerful terrifying lion, and yet caring and merciful enough to die in order to redeem Edmund, that was powerful for me. The adventures that were shared through loyalty and a striving for good and what Aslan would want, those were adventures that I wanted. I cannot express enough how The Chronicles of Narnia has impacted me, though at first I saw them as “only” children’s stories.

I didn’t know the fuller story of Philip’s history with Narnia. I just remember trying, all those years ago, to think of a way to motivate Philip to read, and even being willing to suffer the humiliation of losing the challenge (I did actually try, but Philip’s superior intellect won out!). It tickles me to read of how he too has experienced what so many of us have as we read and read the series after childhood — that our eyes open to the deeper spiritual truths embedded in what seems to be “only” a child’s fairy tale.

I’m reminded of a couple of my favorite C.S. Lewis quotes about reading:

“Some day you will be old enough to start reading fairy tales again.”

This has been my personal experience with The Chronicles of Narnia, as well as with other great stories for children. I’m especially looking forward to rereading The Horse and His Boy, as I have now tallied six people who count it as their favorite of the series, and for compelling reasons!