I’ve decided to ix-nay the cutesy categories that correspond to the day of the week. It was too constraining, and I was struggling with making posts fit into categories. I’m going to be way more organic and true-to-reality with the categories, as they come together.

Today I want to feature the first of what I anticipate to be many “reading testimonials”*, which are basically vignettes from regular people throughout Gracepoint ministries sharing their own stories of a powerful reading experience. Some are from long ago, and some are more recent. And some may or may not include a mini-review of specific books. To kick it off is a story from Sophia, who is serving on staff in our Praxis ministry at Gracepoint Berkeley church.

I was never a strong reader as a child and never had much interest in reading.  The fact that I was an immigrant kid trying to learn English growing up did not help either. Then as an adult, I was always too busy to read for pleasure. As a parent, I saw that my daughter was also not fond of reading, but accepted it as a given, and that she was just like me. Recently, I wanted to motivate my daughter to read more, so I tried managing her time better by requiring her to read for X amount of hours after school.  But I saw that I was doing something that I would not like to be put upon myself at that age! Then I tried rewarding her for reading books and allowed her to choose her own books, despite my own opinion about the books.  That effort gained some traction because she was motivated by the reward and the books she chose were interesting enough. I also started reading with her whenever I could; she would read one page and I the next. Through another conversation with Emily, I decided to try to lead by example rather than just telling her to read and not do it myself. 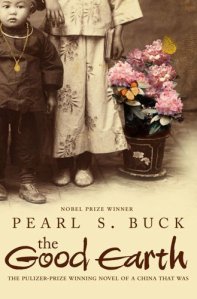 Therefore, out of my love for my child, I picked up the book The Good Earth by Pearl Buck from the Bibliopolis Adult Extension bookshelf. I was not sure how much time I would have to read for pleasure; all I knew was that I have always been curious about some of the famous books but never got time to actually read them. I wanted to know what a Nobel-prize winning author writes like.  And to my complete surprise, I was hooked once I started reading. I couldn’t put the book down.

As a Chinese growing up both in Taiwan and America, I was impressed by the detailed yet succinct way in which Pearl Buck described the Chinese sentiment. Her observations about the irony of human life cycle and the weakness of man in the face of temptation made a deep impression on me as a Christian. Wang Lung is a poor but upwardly mobile farmer trying to raise a family during a time when the rich seem to have all the blessings from the gods, and the poor are stuck in their relentless cycle of poverty. But through hard work and some luck, he slowly becomes rich. The irony is that the problems he faces after becoming rich – the temptations he faces as a man and the family quarrels – were much sadder for me to read than the struggles he has as a poor man. Wang Lung never loses his love for the earth, yet he is, after all, a mere man and gives into his lust and self-justifying voices. Moreover, he has no higher authorities to look to except the two earthen figures to which he gives some incense from time to time, but does not hold back in spitting upon when he feels like it. Despite everything, he is a likable figure and an accurate portrayal of a good, hard-working Chinese. At the end of the story, Wang’s life is eerily similar to those he envied in the first place.

The book helped me to have a greater appreciation for  the cultural struggles that took place in China in the past one hundred years.  It gave me a greater understading and greater sympathy for the Chinese people, even though I am a Chinese myself.  I think it’s a must read for all who are interested in getting to know the Chinese people of today!

More than that, I am surprised by how hooked I got on the book. After finishing it, I decided to check out Between Shades of Gray, after reading Elise’s review and watching the video with the author. I’m reading that now!

Can you relate to Sophia’s story at all? Are you someone who “discovered” reading once you became a parent? Have you ever stumbled upon a great book in an effort to model reading for your child? Or when trying to find a good book for someone else, you found one you liked?

*If you have a catchy category title for this type of post, I’m open to suggestions.

1 thought on “Reading Testimonial: The Good Earth, A Good Book”